If you are into chess then you must have come across the word ‘castle’. It is one of the most special rules and the best part of it is, that you can easily learn this if you are unfamiliar with the concept of the castle.

Castle is when a player in the chess game holds the power of moving two of his chess at the same time. The catch here is that the individual can only castle once in the entire game and under certain selective conditions.

There are certainly two types of castling and they are as follows:-

Here, the white king goes left and the black king moves to his right.

Under both scenarios, the rook usually hops over the king to settle next to the latter. It must be taken into consideration that to the castle, picking up the king first is a must instead of the rook. Thus, these are the two types of chess long castle. 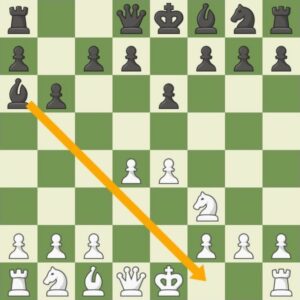 Importance of castling in chess

The main motive of castling in chess is to keep the king safe and it is just for the reason as the move takes away the primary piece from the centre of the board followed by tucking him far away behind a wall of pawns. In the case of beginners, a large fraction of games are lost just because the player fails to protect his king.

Although castling is a very powerful move, there are certain times when the king may be put in danger just because of castling which is why the player must be careful. This is the very reason why it is seen that most of the beginner’s castle as soon as they can while in most cases the experts choose to initiate the move much later in the entire game.

How do you castle in chess?

When it comes to castle chess, there are certain rules that you need to follow before actually castling in chess:-

The moment your king move, you are in no power to castle no matter whether or not you have moved your king to the starting square. Under this, many of the strategies include the king of the opponent party to move particularly for this reason.

If you want to castle, then you must not move your rook. Thus, the king, as well as the rook that you are castling with, must not have moved to the castle.

King cannot be in check

There is no doubt that castling is a very appealing escape but it must be taken into consideration that castling while in check is a big NO. Therefore, to the castle, it is important to get out of the check. The difference between moving and being checked is that in the latter case you are not ripped off the ability to castle later unlike in the former one.

King cannot pass through the check

If any of the squares where the king can venture or moves onto would put the individual in check, the individual will lose the power to check. Thus, here your priority should be to get rid of the entire pesky attacking piece.

It is a must that all the spaces between both the king and rook must be vacant. This is the exact reason why it is of utmost vital to get the pieces out without any further delay. how to castle in chess?

How Many ways You Can Castle in Chess?

When Can You Castle in Chess?

The right and permitted time when it comes to choosing a castle in chess are only when neither the rook nor the king has been moved out of their place. Additionally, the squares between both the rook and king must be strictly vacant besides the king is not able to end up, leave or even cross over a certain square that is made to attack by an opposing piece.

Thus, castling helps in achieving two things which are creating a safe space for the king along with developing the rook so that it can be brought out to the closest centre of the board where it can easily fall into the game. The concept is the easiest as well as the hardest since you must know the exact right time to use this move because one wrong move can help you in falling into unlikable situations. Now that you have all the information you need, you are all set to initiate the castle move in the chess game.